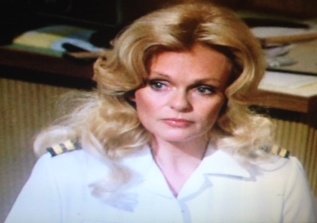 I swear I never hit Aunt Agnes over the head to steal her aging Southern beau! But, at least, I am not alone when being falsely accused.

Indeed, on My Johnny Lies Over the Ocean, a first season episode of Murder, She Wrote, the divinely scrumptious Lynda Day George finds all eyes on her as the series’ grand dame Jessica Fletcher (winningly acted by the legendary Angela Lansbury) wonders if her character, Diane Shelley, might be gas lighting her fragile niece on a rocking ship of horrors.

Of course, with roles in such films as Mortuary, Pieces, Beyond Evil, Day of the Animals and Ants, George is definitely one of the high priestesses of horror for certain generations. Here, as in most of those films, she is, once again, a victim of circumstance. Her quietly gracious Shelley is merely escaping a bad love affair hence her mysterious appearance as this boat’s latest purser.

Slightly reminiscent of Cruise into Terror, the 78 television film she starred in, George is joined on this outing by her Animals’ co-star Leslie Nielsen. As Jessica’s grieving charge, one of many relatives of the mystery loving maven that would be introduced over the years, actress Belinda J. Montgomery (best known to terror fiends for starring in sleazy 84 slasher Silent Madness) is on the receiving end of this story’s horror archetypes (shadowy attacks, ghostly callings and shaky pleas of sanity). She handles these chores with a liquid grace. Still, one wonders what would have occurred if she and George had switched places. Reimagining, anyone?