It may be fun to go to the dogs every once in awhile, but there is nothing, dramatically speaking, like a good cat fight! Eclectic entertainment goddess Cherie Currie certainly dives into some fur snarling fisticuffs in the first season episode of Murder, She Wrote entitled (appropriately enough) It’s a Dog’s Life and definitely comes out shining!

Best known for fronting the influential rock band The Runaways, Currie, also, had a varied acting career with roles in such horror and science fiction epics like Parasite, Wavelength and Twilight Zone: The Movie. Here, her co-stars include such genre stalwarts as Dallas’ Jared Martin (Aenigma, New Gladiators), Forrest Tucker (The Crawling Eye, The Abominable Snowman), Dan O’Herlihy (Halloween III, The Cabinet of Caligari), Dean Jones (Two on a Guillotine) and James Hampton (Teen Wolf, Hangar 18).

Playing Echo, the sarcastic daughter of a spiritually obsessed heiress (Soap’s Cathryn Damon who, also, practiced maternal witchiness in the television flick Midnight Offerings), Currie is obviously having a ball as Echo engages in verbal combat with her drunken aunt (played by soap stalwart Lenore Kasdorf). Currie, also, excellently invests the flippancy that Echo has for authority figures with a subtle comic timing and truthfully petulant sass. On the flip side, Currie and Damon do establish a natural affection between their characters, making viewers long to know more about them. 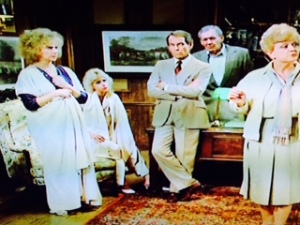 All involved (including the elegant Lynn Redgrave), though, seem to warm nicely to the absurdly fun plotline (which finds a beloved beagle on trial for murder), making this a rather delightful entry in this seminal, femme powered detective series.