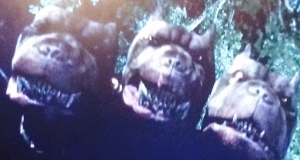 What if the hair of the dog that bit you actually has three heads? Well, then you might end up with a crazily CGI ridden opus like 2005’s Cerberus.

When Attila the Hun’s prized sword is stolen by a group of mercenaries, including a hard hearted soldier of fortune portrayed by television favorite Greg Evigan, the famed marauder’s deadly Cerberus, a three headed dog with a snake for a tail, is unleashed upon a tiny, confused Romanian village. (Perhaps, part of their confusion derives from the fact that the Cerberus is, primarily, considered an offspring of Greek mythology, but I digress…)

Directed with energy by John Terlesky, whose own acting credits include such action ventures as Deathstalker 2 and Damned River, this toothy timewaster is perhaps most notable (to queer kids who love their horror gals) for the involvement of eclectic genre goddess Emmanuelle Vaugier (Saw 2, Ripper, House of the Dead 2, Return to the Cabin by the Lake, The Fear: Resurrection).