Behind the scenes, it may take a village to put on a show. But, sometimes, on the stage itself, all you need is one special presence.

Such is the case with the brilliant Debra De Liso. Best known as Kimberly Clark in the cult horror classic The Slumber Party Massacre, De Liso is a West Coast theatrical mainstay, with teaching, directing and acting credits galore. Now, after years of helping amazing talent travel with their own solo adventures across the boards, she has developed her own memoir piece, Beautiful, Terrifying, Love.

Recently, De Liso took this intimate production, which has been called “a tantalizing Twilight Zone marathon of a life, told by a poetic dynamo” to the Edinburgh Fringe Festival in Scotland. There, it was referred to as “involving” by WOW 24/7 and the press, also, delighted in the fact that references to her horror film past were made during the evening. 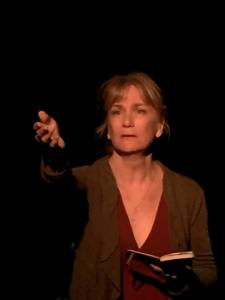 But, while shaded by veins of humor, the show, tenderly, focuses on De Liso’s relationship with her beloved and very talented bi-polar daughter. These photos from the production, taken by De Liso’s sister, obviously show her heartfelt connectedness to the material, making it seem like a sure fire journey that lovers of, both, the arts and the humanities will definitely want to be taken on.

More information on Beautiful, Terrifying, Love and De Liso, who has also appeared in such horror and cult films as Iced and Dr. Caligari, can be gathered at http://www.debradeliso.com.