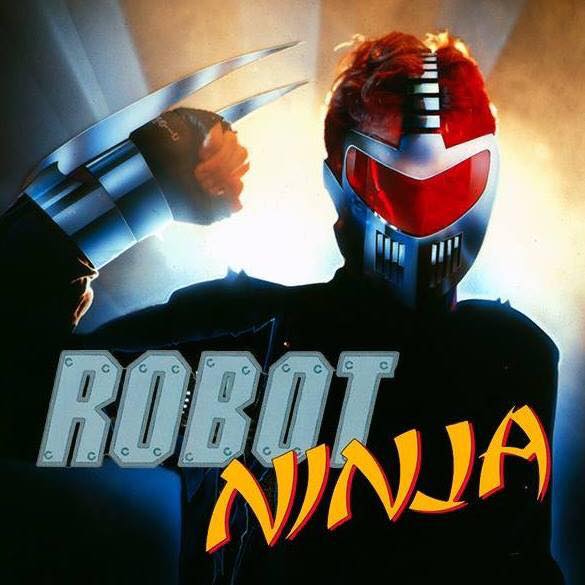 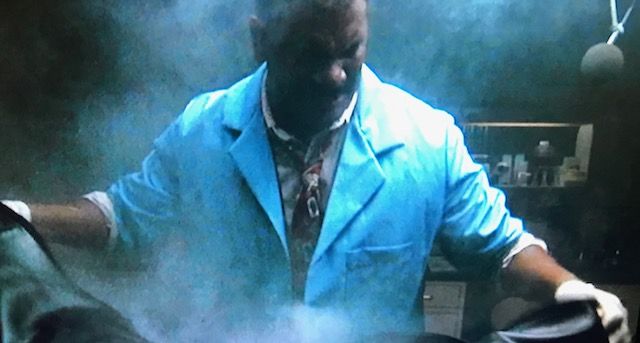 If queer slasher fans could view only one entry in the Friday the 13th series during Pride Month, they probably couldn’t make a better choice than the 8th follow up to the famed 1980 original, Jason Goes to Hell. Written and directed by (the then 23 year old) Adam Marcus, this sequel, which wildly introduced a body hopping mythology to the Jason legend, has some of the most intriguingly gay elements ever committed to a mainstream horror enterprise. 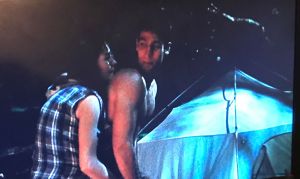 Working against the grain, the straight yet incredibly inclusive Marcus, even found his way around studio tampering. An edict to add a more traditional camper-bloodbath sequence to his unconventional narrative inspired him to balance out the (frequently unfair) exploitation scales by adding extensive male nudity to the requested material. While Friday the 13th, The Final Chapter featured a couple of its party happy male characters doffing their shorts for a brief skinny dipping sequence, the shots involving the charismatic and handsome Michael B. Silver here are probably still some of the most significant, purposely photographed expressions of male beauty in a horror series – especially one beloved by heteronormative bro types. 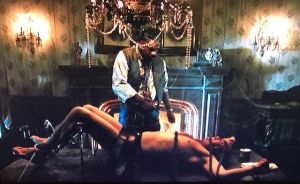 Marcus also introduces a backroom leather bar essence to the film by adding a gay S and M quality to one of the transference sequences. When the body of Richard Gant’s coroner, the first to be overtaken by the supernaturally pulsing heart of Jason, has reached the limit of physical abuse it can take, he chooses a police officer named Josh (Andrew Bloch) to replace him. Naturally, he strips Josh of his clothes, binds him down and shaves his face with a straight razor. Not only are both actors middle aged (with bodies marking that status), giving the sequence a bizarre swipe of realism, but the fact that Gant is Black and Bloch is white also adds another dose of edginess that was sure to have more conservative connoisseurs of slasher films either shaking their heads in queasy wonderment or outright ignoring what had just been placed in front of them.  While other entries in the series has employed minority actors in a variety of functions, the fact that the first interracial kiss in the Friday the 13th cannon is between two men is not only a hysterical back slap to the rampant heterosexuality championed by these films, but is seemingly an almost historical moment, as well. 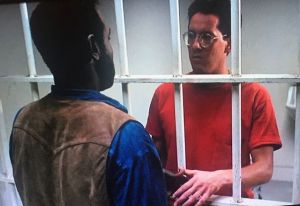 Marcus’ provocative sense also extends to the relationship between Steven Freeman, the film’s hero as brought to life by Friday the 13th, The Series’ John D. LeMay, and Creighton Duke, a mysterious bounty hunter played by Steven Williams. The completely unique Duke, arguably this enterprise’s most popular character, confronts Freeman in his jail cell and offers to provide him with life saving information… for a price. Duke then proceeds to break two of Freeman’s fingers with a lingering almost salacious intent. Once again here, Duke is Black and Freeman is white…marking this not only as another homoerotic exchange but also adding a social context to the material, as well. One could almost imagine that Duke is making the clean cut Freeman pay for all the racism and stereotyping that he has endured in his lifetime from the Caucasian world–at-large. Thus, this film not only utilizes a queer sensibility, but seems relentlessly contemporary given our current reexamination of issues of prejudice and race…a perhaps accidental yet truly major achievement. 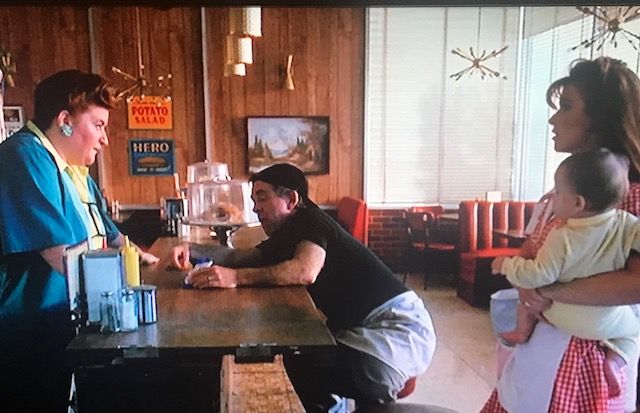 Furthering the dialogue, in the know fans could almost invent an alternative back story to the comic relief coupling of the statuesque Joey (Rusty Schwimmer) and the tiny Shelby (Leslie Jordan). Jordan, an openly gay comic and popular television actor, and Schwimmer, whose other genre work includes The Belko Experiment and an episode of Tales from the Crypt, truly commit to the love that these two characters have for each other. But alternative scholars could imagine that these two characters, both fitting certain known stereotypes on the rainbow spectrum, could have connected in an era when their preferences weren’t appreciated and, through mutual affection and lack of viable options, decided to settle down and produce a family. Granted, this may be a slight stretch…but, then again, considering Marcus’ determination to push buttons…maybe not. He did cast adorable Broadway veteran and Kate and Allie co-star Allison Smith, who holds the record for playing the part of Annie the longest on the Great White Way, as that couple’s devoted co-worker. So…how far off could I be?

Nicely, this determined creator is continuing his diverse approach to filmmaking. Marcus’ latest, Secret Santa features a cast that defies ageism, sexism and is a cocktail of cultures and different backgrounds.  Importantly, the film also has a strong, multi-layered gay outreach, as well. You can follow all the wintery mayhem of that project at https://www.facebook.com/secretsantathemovie/. 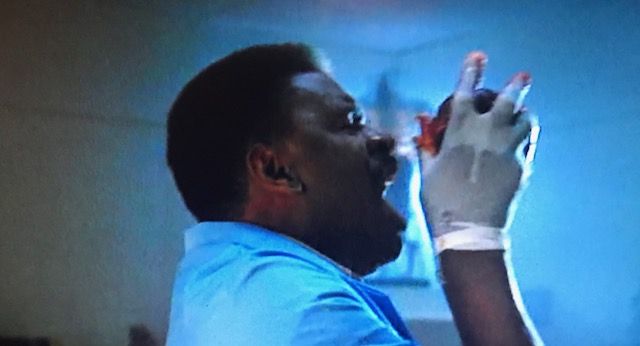 Some people like a little self referential humor in their horror films. Others like a little bit of Eugene O’Neill. As evidenced by Secret Santa, the talented folks at Skeleton Crew like a bit of both. This explosive horror comedy takes place on Christmas Day with one of the most dysfunctional, purely enjoyable families that you’ll ever meet…and the results are predictably (and, often, not so predictably) bloody.

With good reason, April is reluctantly bringing her boyfriend Ty home for the holidays. Her mother, Shari, is an arch diva. Her sister, Penny, is a resentful malcontent. On the other side of the sexes, her stepbrother, Jackson, is a little too touchy feely while her father, Leonard, is persona non grata around the premises. Soon, though, April is dealing with more than just tense talk and frayed emotions between meal courses. Someone on the premises is determined that things get real during this visit…real bloody, that is. Thus, the typical family battles now have a body count…a big one. 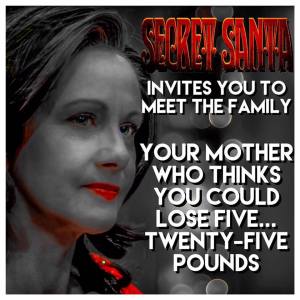 Smarting from the way their work was transformed on the big budget Texas Chainsaw 3D, screenwriters Adam Marcus (Jason Goes to Hell) and Debra Sullivan work with relatable menace here. Everyone (with any kind of familial issue) will be able to recognize themselves in one awkward moment or another as the proceedings unfold. Thankfully, the script is also high on laughs and gruesome kills. Totally devoting themselves to the project, Marcus also directs the proceedings with pure joy. Sullivan, meanwhile, rings every note out of the self centered Shari. Hers is a delicious performance, worthy of applause from that master of diva characterizations, Tennessee Williams. In fact, that literary savant would have surely found his creative juices flowing if he had been lucky enough to see her work in this.

The cast, as a whole, is particularly good, though. Importantly, A Leslie Kies simply radiates as April, bringing heart, truth and fury to the role. She is matched, note for note, by her co-stars.

But what truly marks Secret Santa as something special is its diversity and inclusiveness. Marcus and Sullivan provide roles for women of body types and age ranges that are generally ignored here. Their cast is also racially and culturally diverse. In Kyle, enthusiastically and sensitively played by Drew Lynch, they also help create one of the most unique and interesting gay characters to ever be featured in a horror film. Sweet natured with a hesitant stutter, Kyle grows, immeasurably, throughout the film. Hiding his sexuality at first, by the film’s end he is out and proud and able to produce the film’s sweetest and truest moments with a determined grace. Here’s hoping, as the spectrum of the terror community grows ever more fluid, that Marcus and Sullivan will lead the way to more projects such as this one. It’s the horror future that all fans truly deserve. …and I’m sure that, in whatever universe they may be floating in now, Williams and O’Neill would totally (bloody) agree. 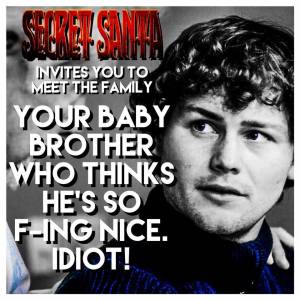 More information on Secret Santa, which is currently hitting a variety of festivals and film events, is available at https://www.facebook.com/secretsantathemovie/.