“So this is spring?!?” a lot of Midwesterners moaned after yesterday’s surprisingly messy snowstorm. But, I think maybe the mischievous goddesses of weather mayhem were just celebrating the release of the excellent trailer for Todd Nunes’ upcoming Christmas slasher All Through the House.

Featuring plenty of bloody mayhem along with hints at some accomplished performances and an interesting back story, this quick peek generates enough seasonal heat to definitely make All Through the House one of this year’s most eagerly anticipated features.

Be sure to keep your bloody stockings full at
https://www.facebook.com/allthroughthehouseSLASHER/, as well! 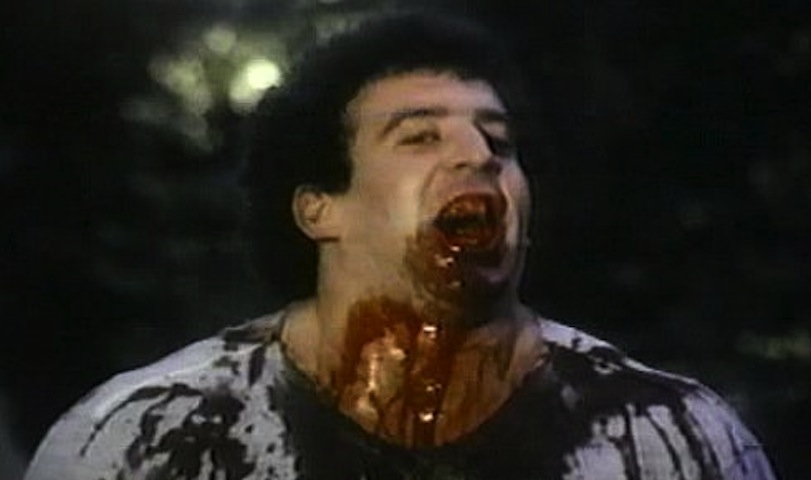 I have so much to be grateful for this Thanksgiving. The love of the lesbian prostitute nuns who raised me – that pickled toe in a jar — and, most especially, the giddily insane performance of bodybuilder Jake Steinfeld in one of the only Thanksgiving slashers in existence – 1981’s Home Sweet Home!

With muscles bulging and the trilling laughter of a demented schoolgirl (leaking from his throat), Steinfeld plays Jay, an asylum escapee, whom after killing a kind traveler (for his vehicle)and then gleefully bumping off an old lady in a crosswalk, sets his murderous sights on a dysfunctional family and their Turkey Day celebration. Besides the random adults (whom all seem to be plucked from a 1970s NYC porn set), potential victims include a Kiss obsessed teen whose guitar is attached to his hip and a young (seemingly) autistic girl (played by young Vinessa Shaw who, in adulthood, would enhance such projects as Eyes Wide Shut and The Hills Have Eyes remake).

That director Nettie Pena, would go on to acclaim as a documentarian and is one of the few women to direct a ‘classic’ slasher film, does little to enhance the film’s meandering moments. But a bizarre aura soaks through the film’s more exciting bits and anytime that Stenfield is onscreen is an absolute hoot.

Definitely not the best or worst of its genre, the behind-the-scenes stories that could be told about this production, alone, seemingly make it ripe for a nice, extras-strewn DVD revival.