Of all the things that an excess of television viewing can tell you, to never get on a ship with Lee Meriwether may be the most important!

A co-starring role in the 1978 television film Cruise into Terror found the luscious, amber waved Meriwether seduced by a devilish sarcophagus. Her 1993 appearance on the Ship of Thieves episode of Murder, She Wrote, meanwhile, allowed her to indulge in even deadlier circumstances. As the sophisticated Leslie Hunter, Jessica’s old college pal, Meriwether appears to be aglow with love for the captain of a soon to be retired ship. But the closing circumstances reveal very sinister edges to Hunter’s character, facets that Meriwether embraces with clipped intensity. 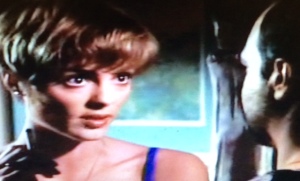 Nicely, on this voyage, Meriwether is joined in mercenary activity by the equally stunning Michelle Johnson (Waxwork, Dr. Giggles, Blood Ties, Werewolf). Johnson provides smoothly evil emoting, as well, making this particular outing a delicious excursion for those who like their femmes with a dubious edge. 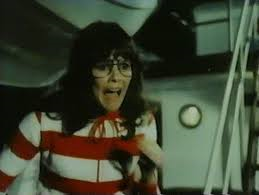 Cover me in a big red banner and poke me just to make sure I’m breathing!

To make the honor even greater, this episode focuses on one of my favorite television horror films of all time, Cruise into Terror, a still of which is pictured, above.

Be sure to check out all the goofy antics at

Then, if you have enough time left over, feel free to revisit my interview with the divine Lee Meriwether, where we talk a bit about her participation in Cruise and her co-star in the film, John Forsythe!