Too much of a good thing can be deadly. Just ask me after I’ve eaten too many of those chocolate frosted cake donuts from the corner 7-11. Meanwhile, writer-director Jason Zink explores how honorable intentions can turn eviseratingly militant in his survivalist horror effort Straight Edge Kegger.

Here, our hero Brad (Cory Kays) has started to grow tired of the violent antics of James (Julio Alexander), his straight edge brother in arms. While once James had protected the streets and defended the innocent, he now uses his leadership to violently squash anyone behaving in a way that he doesn’t like. Thus, Brad falls under the influence of a happy go lucky party hound named Sean (Sean Jones). When James discovers that Brad is attending a house rave with his newfound companion, he and his crew set out to punish their former associate with maniacal precision. Locking down the home, they soon are brutally killing off the formerly blissful drunk and drugged revelers. It is up to Brad, who understands James’ mindset, Sean and Maybe (Evey Reidy), a girl that Brad has developed a crush on, to find a way to defeat the unrepentant slaughterers before they join the other unfortunate victims of James’ murderous rage. 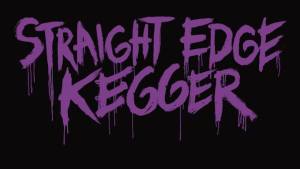 Nicely, akin to Chris Moore and his 2018 savagely fun effort Triggered, Zink skillfully exposes how being too extremist in one’s views is never a good thing, no matter the intentions. Ultimately, James, magnetically played by Alexander, and his throng remind one of our current political leaders whom have established a social landscape where aggressive behavior is encouraged against anyone falling outside of the straight, white norm.

As with many genre exercises, one does have to let go of disbelief a bit as James and his crew make their way steadily through both punk rock celebrants and law enforcement officials with ease. But the gore is swift and vicious and executed with a sense of glee. The performances, particularly those of Kays and Alexander, are also solid, making this low budget offering both a thrilling exploitation ride and a potentially powerful think piece, as well.

More information on Straight Edge Kegger is available at https://www.facebook.com/StraightEdgeKegger/.