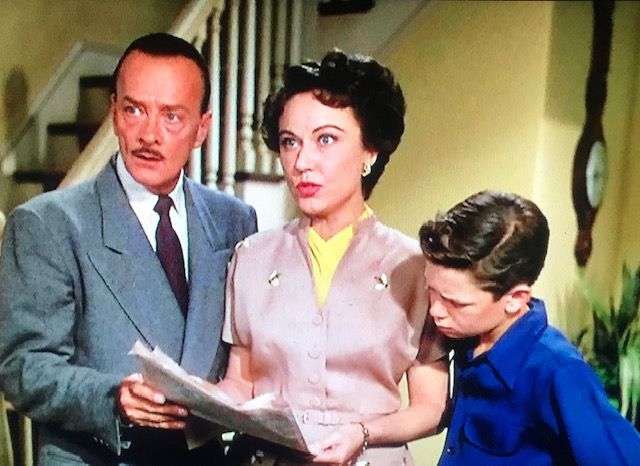 As with many superstars, Mary Astor and Constance Bennett among them, King Kong’s expressive Fay Wray found herself playing mothers of grown daughters onscreen far too soon. Nicely, Wray finds plenty of moments to bring a sense of charm and joy to her Mrs. Gordon Kimbell – no first name given!!! – in the 1953 MGM musical Small Town Girl.

Mothering musical sensation Jane Powell as she romances Farley Granger’s society playboy (while simultaneously wrangling her way through the rest of her loved one’s strong personalities), Wray is able to show moments of exasperated tenderness over her brood’s foibles and eccentricities while providing evidence that she is the force that keeps her family on the right track.

Terror celebrants, meanwhile, will be pleased to see Wray, whose other horror credits include Doctor X and Mystery in the Wax Museum, share a scene or two with Granger. Granger, who proves here that he was one of the most striking presences in the Golden Age of Hollywood, is well known for his work in Hitchcock’s homoerotic masterpieces, Rope and Strangers on a Train. Besides that amazing contribution to the legacy of dark cinema, this eclectic specimen appeared in a variety of Giallo enterprises (So Sweet, So Dead, Something Creeping in the Dark, What Have They Done to Your Daughters?) and enlivened the beloved 1981 slasher The Prowler, which is highlighted by Tom Savini’s gruesome effects work.