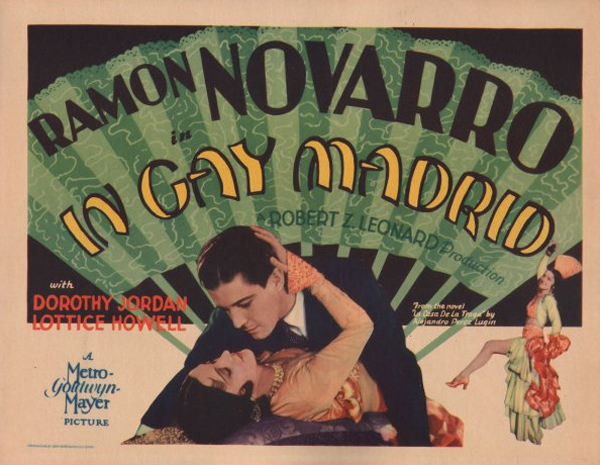 Ramon Navarro, one of the more charismatic gay performers to charm his way through early Hollywood talkies, earned his stripes as a Horror Hunk due to a latter day appearance on the Boris Karloff hosted anthology series Thriller. Here, we look at some of his most famous roles in other genres.

It’s the golden rule of slashers – do drugs or have sex (and goddess forbid, if you do both) and you pay the price with the knife. But horror films are not the only moralistic form of entertainment….by far.

Let’s examine the case of Ricardo, the careless youth that Ramon Navarro plays in 1930’s In Gay Madrid. Indeed, Ricardo, who tells impulsive tales and flirts with a dancehall queen, must suffer through the punishing effects of a gunshot wound before being allowed to marry the girl of his dreams, the kind and loyal Carmina (Dorothy Jordan).

Surprisingly chaste for being a Pre-Code film, In Gay Madrid was actually developed as an opportunity for Navarro to show off his singing voice. This he does to solid effect in a couple of grand choral numbers.

But what is most noticeable here is the chemistry that he shares with the handsome David Scott. Scott, as Carmina’s innocent brother Ernesto, definitely plays up his devotion to Ricardo and the friction shared between these two is ultimately far greater than any emotion that happens to accidentally arise between Jordan and Navarro. In Gay Madrid, indeed!