Described as a rival to Rudolph Valentino, the dashing Antonio Moreno acted opposite many of the queens of the silent cinema – Gloria Swanson, Clara Bow and the Gish sisters. Unfortunately, the public wasn’t ready for a Spanish superstar once sound became cinema’s king. But by middle age, this consummate professional had developed a serious career in Hollywood as a character actor. The most important of his roles during that era, nicely, included outings in John Ford’s iconic The Searchers and the classic aqua-terror The Creature from the Black Lagoon.

The latter project, of course, has gained him decades of respect and admiration from generations of monster kids. There, still suave and commanding, he plays Carl Maia, the man ultimately responsible for discovering everyone’s favorite Gill-man…a fact that should fill every LGBTQIA genre fan’s heart with glee.

For, as specifically detailed in Clara E. Rodriguez‘s book Heroes, Lovers and Others (The Story of Latinos in Hollywood), outside of the glaring lights of show business, Moreno lived an openly gay existence. While one always wishes, in retrospect, that performers such as Moreno had been able to passionately embrace their true natures, publicly, it is also always an honor to discover them after the fact and celebrate the perspectives of their experience with a modern appreciation. Moreno, as with many of our gay and lesbian forebears, helped pave the way for the (still, unfortunately, tremulous) freedoms that we have today. That he did so while creating works of art with figures like Alfred Hitchcock (Notorious), Cary Grant (Crisis, along with fellow queer icon Ramon Navarro) and Gary Cooper (Dallas) only proves how worthy of recognition, within our community and outside of it, he really is. 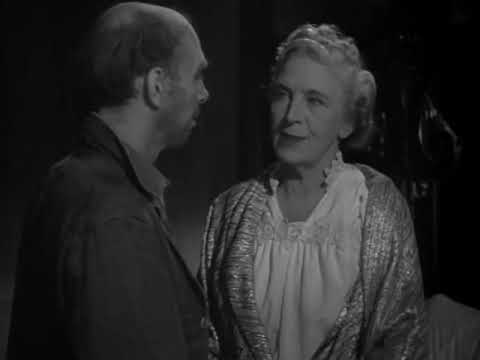 A product of the Broadway and vaudeville stages, the distinguished Cecil Cunningham was a character actress who, for decades, supported such cinema queens as Hedy LaMarr, Greta Garbo, Mary Astor, Carole Lombard (pictured below) and Barbara Stanwyck. Of course, smart cinema enthusiasts know that she was a presence in her own right, making a strong impression in smaller roles that often weren’t even credited onscreen.

Thankfully for horror fans, Cunningham was given one of her most prestigious undertakings in the fun Warner Brothers’ genre fest The Hidden Hand. Released in 1942, this gem found this regal celluloid queen in fine form as Lorinda Channing, the head of a family of greedy, mentally unbalanced socialites. Pretending to be near her death, Channing invites her nearest and dearest to her estate. Surmising that they all want her cold for her cash, this devious diva enlists the help of her brother, a deranged killer who has just escaped an asylum, to assist her in her plotting against her avaricious kinfolk.

Filled with weird humor and old dark house theatrics, this project also gave Cunningham plenty of room to utilize many of her acting tools. She brings a proud and strange presence to Channing, reveling in a role that would have normally been filled by a Boris Karloff or Laird Cregar type. Her work here is definitely the precursor to contemporary artists like Deanna Dunagan and Lin Shaye, fine actresses, who have embellished and empowered such films as The Visit and Insidious with their distinguished essences. 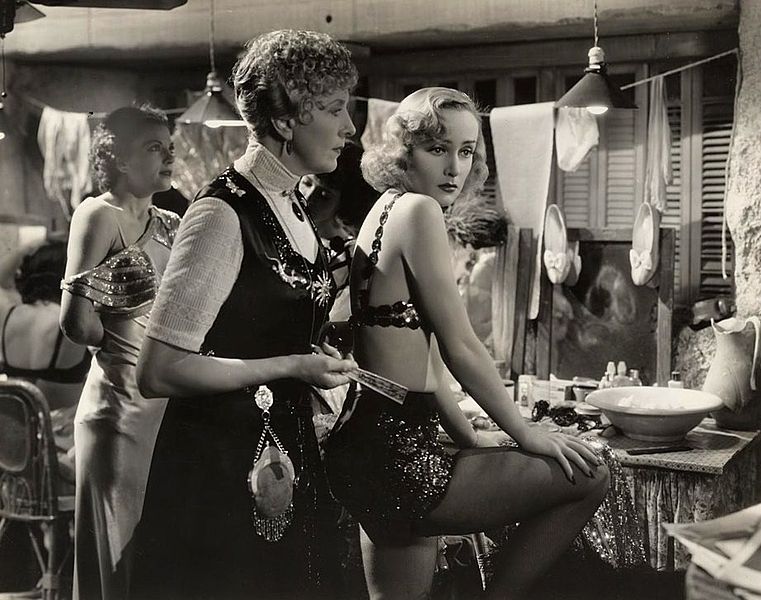 Cunningham, who also appeared in 1934’s hard to find Return of The Terror and Ladies They Talk About, an early WIP effort, died at the age of 70 in 1959. Sixty years later, her filmography (and her genre credits, in particular) seems truly ripe for rediscovery.

One of early horror’s most refreshing presences, the glorious Marguerite Churchill charmed her way through two significant entries of macabre mayhem in 1936.

Working with Boris Karloff under the intense supervision of the distinguished Michael Curtiz (Casablanca), Churchill’s Nancy spends the majority of The Walking Dead radiating with lush concern for Karloff’s ill used John Ellman. Brought back to life after being sent to his death by a crew of mob lowlifes, including the eternally oily Ricardo Cortez as Nolan, Ellman’s revenge fueled actions are magnified in an understanding light here via Karloff’s haunted facial tics and Churchill’s sympathetic glow.

Dracula’s Daughter meanwhile allowed Churchill to display a sassier nature. Consistently providing comic aggravation for esteemed psychiatrist Jeffrey Garth (Otto Kruger), Churchill is full of zesty energy here. Even when her character faces peril as the victim of the exotic Countess Marya (Gloria Holden), Churchill shines with warmth. It’s no surprise that, at the film’s fade out, the darker charms of Holden pale next to Holden’s vibrant spark and Kruger’s Garth is as smitten with her as those many lucky viewers in the dark.

Ultimately surviving two of her three children by several years, Churchill retired from the screen in the early ‘50s. Later she spent many years overseas, before putting down roots in Oklahoma. Wherever she went, though, one hopes that she understood the depths of her filmic legacy and all the happiness that she provided cinema lovers, worldwide. 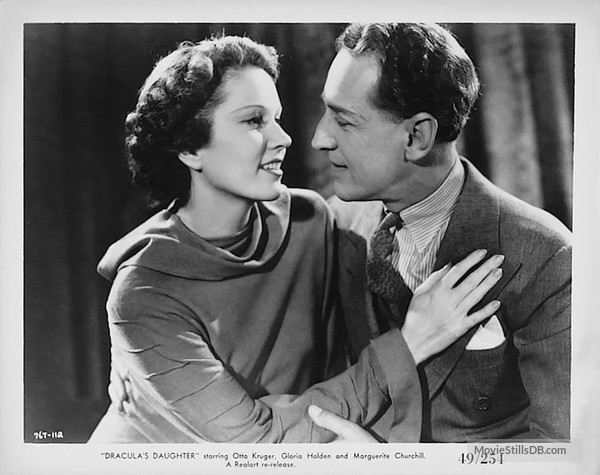 Dead Men Walk was released on Valentine’s Day in 1943. It features a skilled dual performance from refined terror legend George Zucco. Other significant participants include Frankenstein’s Dwight Frye and under appreciated character actress Fern Emmett, who turned up in many minor roles in the classic Universal horrors. For a poverty row production, there is plenty of misty moodiness and fun vampiric action here. Thus, this easily accessible public domain title is well worth checking out.

Granted, the elegant Jo Ann Sayers shared a strong professional association with one of the grand dames of cinema, Rosalind Russell. Sayers not only co-starred with Russell in the bright 1939 mystery Fast and Loose, but she also originated the title role in My Sister Eileen, a popular comedy that would bring Russell continued success in later years. Sayers, perhaps, showed her greatest sense of fortitude, though, in her final major screen role. As the determined Judith Blair, a skilled nurse and the favored companion of the investigative Dr. Mason, Sayers brings a sense of true spunk to the 1940 Boris Karloff thriller The Man With Nine Lives and proves that the women of those early horror programmers were often just as vital and adventurous as their male counterparts. 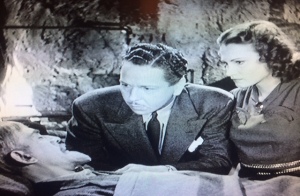 Following the determined Mason (Roger Pryor) to a deserted island, Sayers’ Blair is a magnificent trooper. Even after falling through loose flooring, she helps her curious companion pick away at a wall of ice and assists him in reviving the slumbering Leon Kravaal (Karloff), whose work has kept him (and several other unfortunates) secreted away in a coma for 10 years. Mason is thrilled when Kravaal awakens because, separately, the two have been trying to regulate the use of elongated deep freeze to cure patients of terminal disease. Soon Kravaal realizes that he has accidentally perfected his formula, but the antagonism of the three companions who have been trapped along with him proves to be disastrous. After a one of the men is shot, the unhinged Kravaal kidnaps everyone, determined to perfect his work on them.

Soon Blair is serving as cook, conscience and companion to all. As their numbers dwindle due to Kravaal’s psychosis, she even allows herself to be the mad doctor’s final guinea pig in order to spare Mason. With dignity and poise, Sayers enacts mother, heroine and dignified pin-up here – while the men are often regulated to simple emotions such as fear and anger. Sayers also foreshadows the popular final girl characters of the early 80s when Blair survives Kravaal’s tinkering and lives to work another day with Mason.

Naturally, Karloff, sporting a dusty beard, is magnetic here, portraying a handsome and soft spoken genius eternally teetering eternally on the brink of madness. Visually, cinematographer Benjamin Kline also captures the icy set design with a taut arctic sweep, offering up a nice alternative to the moors and shadowy corners of the day’s popular Frankenstein and Wolf Man pieces. But the most impressive piece of cinema elegance here may be Sayers’ lovely cheekbones and expressive eyes, making her take on Blair a force of celluloid nature in every sense of the word. 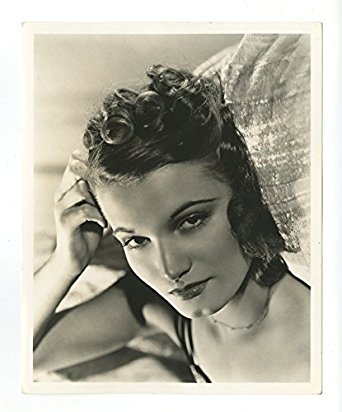