(Hell of a Gal explores the films of the powerful, ever luscious Euro Vixen Helga Liné.)

Jealous looks good on Helga Liné. Of course, it should be noted, that almost everything looks absolutely fabulous on this devilish wonder. But most fans would probably agree that her dual role in the classic Nightmare Castle shows her off best of all.

As Solange, the devoted companion to the crazed Dr. Stephen Arrowsmith (Paul Muller), Liné makes her first appearance in this black and white gothic adventure as a withered crone. But, when we see her next, this gorgeous creature’s true beauty is shining through. (Hmmm…I just had to work a Melanie Griffith title into the proceedings, didn’t I?) It seems that Arrowsmith’s experiments have given the aged Solange the glow of youth…and a bit of possessiveness, as well. Solange is definitely not happy with the arrival of Jenny, played by the irreplaceable Barbara Steele. Jenny is the exact replica of Arrowsmith’s late wife and although she may hold the key to their fortune, Solange would, from all appearances, like her dispatched as quickly as possible.

Of course, all does not go according to plan in the world of villainy and the arrival of Jenny’s handsome and kindly doctor (Marino Mase) and a couple of vengeful ghosts soon spell doom for Arrowsmith and Solange.

But despite the corrosiveness of her character, Steele and director Mario Caiano have nothing but praise for Line’s beauty and talent on the special features of Severin’s beautifully restored copy of the film. Indeed, Liné is, nicely, given more range to play here than is normally required of her and while Ms. Steele, rightfully, has claimed the top spot in my many terror lovers’ hearts, Line’s take on Solange here proves that, in a fair world, she would be right up there with her. 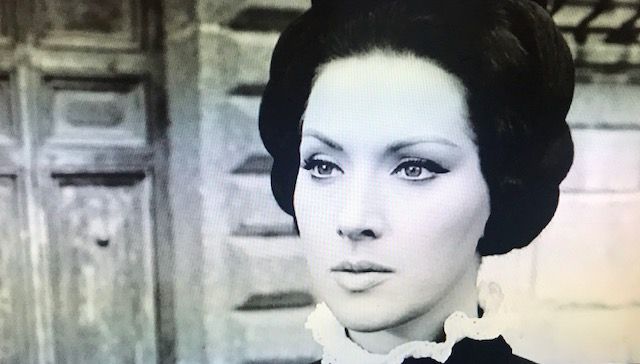 Those interested in the restored version of this film should definitely check it out at https://severin-films.com.