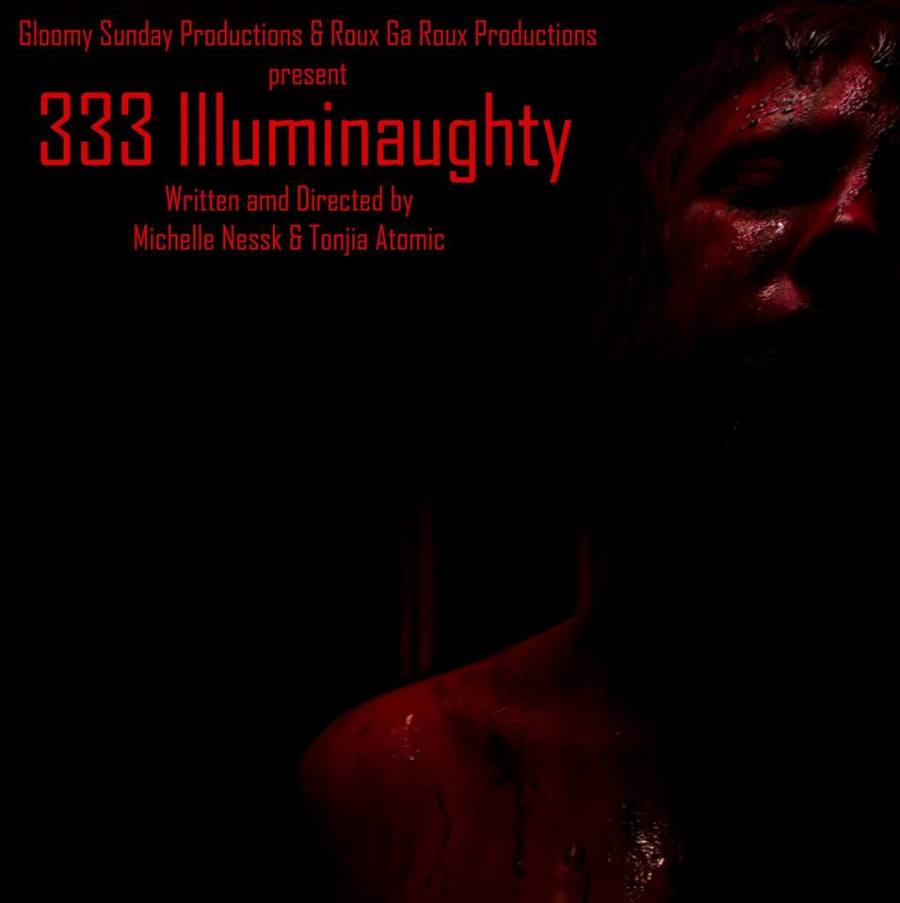 Versatile director-writer-actress Tonjia Atomic is at it again! After helming the wildly anticipated Manos Returns, this multi-hyphenate has co-created 333: Illuminaughty, a short made for the Women in Horror Month 2019 Massive Blood Drive PSA through Horrors of the PNW & Horrors of the PNW VI.

Besides a catchy title and Atomic’s input, this film is notable for the inclusion of Debra Lamb. Late night cable lovers will remember Lamb (Stripped to Kill 2, Evil Spirits, Invisible Maniac) as one of the prime forces of the Scream Queen era. An exotic beauty with a soulful acting style, Lamb has thankfully racked up a number of new credits in the last few years and it is great to see her in action in a project with a strong feminist origin. 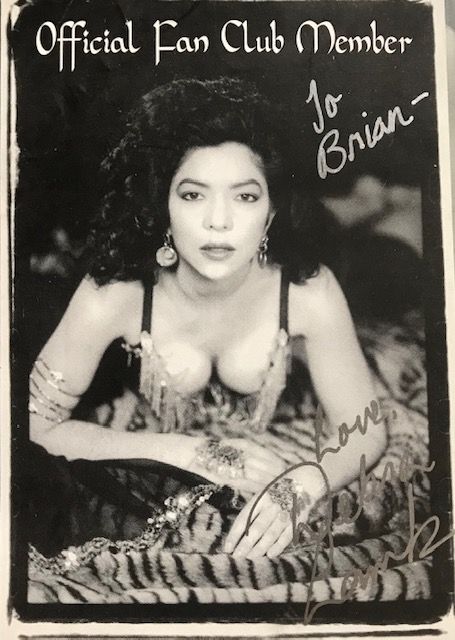 Compassion thy name is Grindhouse!

Clare “Fluff” Llewellyn, one of the visionary forces behind the anthology Hobo With A Trash Can, wherein a homeless man discovers stories of horror among the refuse, is planning a blowout charity event and food drive for the film’s premiere.

Llewellyn, who is still looking for raffle items and other forms of event assistance, can be contacted at http://www.twitter.com/trashanthology. Meanwhile, the film’s official site is http://hobowithatrashcan.wix.com/hobowithatrashcan. 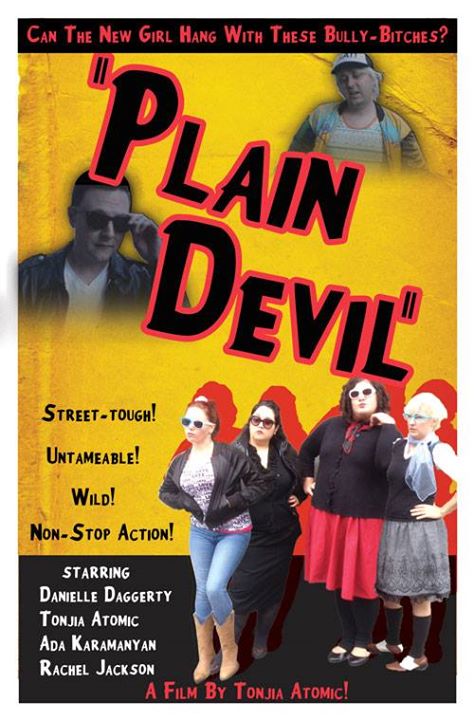 Despite threats and offers of (lots of) candy from other (perhaps more influential) groups, the only sassy sorority that I truly want to join is The Mighty Followers of Tonjia Atomic! For this Seattle based multi-hyphenate has done it, once again, with her delightfully matter-of-fact look at urban gangs called Plain Devil.

Utilizing a swinging 50s ascetic in a modern setting, Atomic tells the story of Little Gypsy, an old school immigrant girl with a contemporary attitude. Setting off to find her destined romantic interests, Montgomery Clift and Mickey Rourke, Little Gypsy is soon verbally accosted by the sassy Bomber and her friends. Little Gypsy is heartbroken until their mutual love of Rourke, unexpectedly, brings her and Bomber together as companions. Soon, Bomber decides that she, Gypsy and co-conspirators, Einstein and Trashy, should form a gang.

Working evocatively against gender stereotypes, Atomic creates a surprisingly easy going vibe here. Things unfold patiently, with even the anticipated rumble arriving with honest charm. Atomic, also, smartly works societal nuances into the piece. The humorous analysis of why gangs are formed packs a true-to-life punch while a continual examination of sexist labels throughout the running time, also, hits home.

Filled with a groovy score and charming performances (particularly from Atomic as the forceful Bomber and Ada Karamanyan as the sweet Little Gypsy), this sunny John Waters-like homage is definitely Atomic’s best work thus far.

Therefore, when you’re done wielding that broken beer bottle in an alley fight; be sure to keep up with Plain Devil at https://www.facebook.com/PlainDevil.

Writer-actress-filmmaker-musician Tonjia Atomic is: A – On the Ball! B- Having a Ball! Or C – Belle of the Ball? How about D – All of the Above!! Atomic has just released the poster for her new girl gang film Plain Devil (as seen above) along with a slideshow of behind-the-scenes footage.

Her Awesome Ouija Board has also been nominated for Best Short Film and Best Music Score by the FANtastic Horror Film Festival. You can vote for Atomic at the link, below: 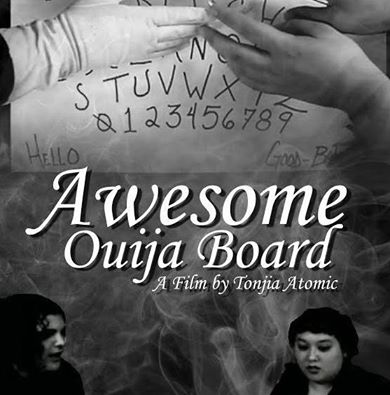 After discovering an ancient photo among her personal work files, photographer Claudia (a fine Barbara Burgio) soon begins to exhibit weird behavior. These occurrences are mild, at first, but soon begin to take over her life. As her concerned boyfriend (a very natural Don Ayers) fights to hold onto her, Claudia seems ready to dive, completely, into the characteristics of the mysterious persona that has been haunting her. 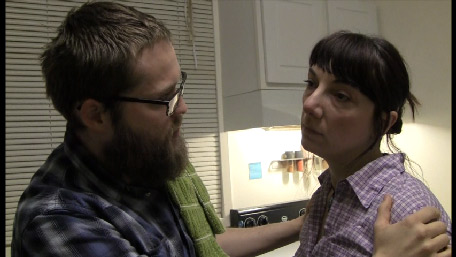 Filled with Josh Phenicie’s simple yet beautiful cinematography and some fine editing (including Derrick Carey’s opening and closing title sequences), Atomic allows us to amble through Claudia’s dreams (done with nice black and white photography) and somnambulant waking states. This, ultimately, creates an ending that surprises and compels viewers.

Imbued with an intimate knowledge of the arts scene and a meticulous background score of fine tunes, Claudia Qui is not a film for those who enthuse for the quick kill, but for those who like to dive into the psychological crevices of the very impressionable mind.

Be sure to keep up with all of Atomic’s vibrantly eclectic projects at http://www.tonjiaatomic.com.

Growing up in Amish country in the hills of Western New York, I witnessed visual miracles. Why, I will never forget the day I stumbled over a snake…draped in a suit or sang a duet with a dewy eyed cow…that just happened to be wearing a pink thong.

But I have never felt such life changing brilliance as I have watching the totally talented; truly divine Tonjia Atomic sing about a gorilla in a bikini! With dusky soulfulness (and a sense of true fun), Atomic (fronting her band Filthy Issue) delivers the goods on this title track to (the awesome) Andrew Shearer’s upcoming film.

Get ready to discover your new goddesses, here!